Since September 2020 I have been a Hill assistant professor (post-doc) at Rutgers university, my mentor is Alex Kontorovich. My research interests lie at the intersection of several topics including number theory, dynamical systems, and mathematical physics. Before this I received my PhD at the University of Bristol under the supervision of Jens Marklof and Bálint Tóth.

I am currently organizing the Rutgers number theory seminar. Please feel free to contact me about the possibility of giving a talk.

Here is a recording of a seminar talk at the New England Dynamical Systems and Number Theory Seminar.

The central image in the above picture, is a so-called Apollonian circle packing (named after Apollonius of Perga circa 200 B.C). To generate such a packing we start with an initial configuration of three mutually tangent circles, like the one drawn in solid lines on the left. Now notice that there are two circles tangent to the three in the initial packing (in dotted lines on the left). We add these to the configuration, and then continue to add circles in all of the resulting gaps. This generates an infinite packing, sketched in the middle. These packings have fascinated the likes of Descartes, Leibniz, the Princess Elizabeth of Bohemia, and the Nobel prize winning chemist Frederick Soddy (who even eulogized them in a poem). While these are geometrically very interesting objects, there is a simple relationship between the radii of the circles discovered by Descartes. This quadratic form, relating the radii of four mutually tangent circles in the packing, allows one to make a connection between Apollonian circle packings, and number theory.

In fact, the packing can also be generated by reflecting the circles in the initial packing, by the circles drawn in red on the right (for example, to generate the circle “a” we reflect the circle “b” through the circle labelled “d”). Thus, the packing can be thought of as the orbit of the initial configuration by a group generated by four reflections. It turns out this group, is a “thin group” (meaning the associated hyperbolic manifold has infinite volume - see this review paper for more information). One can think of thin groups as an extension of a (hyperbolic) lattice, except with sparser points (while a lattice has constant density, a thin group has bigger and bigger gaps as you move out). The study of thin groups has become a bit of a hot topic at the moment owing to the ubiquity of these groups, their applications to number theory and geometry, and the development of new tools in this setting.

One of the key problems in this area, the Apollonian counting problem, is to count the number of circles in such a packing with radius larger than $1/T$. In a recent paper (see here), Alex Kontorovich and I have done exactly this and achieved a greatly improved (by an order of magnitude) error term. The reason this is a hard (and interesting!) problem is that the group generating the packing, for technical reasons does not lend itself to spectral methods. Our paper overcomes exactly this technical difficulty, and thus opens this problem up to previously established spectral methods.

One of the projects from my thesis was to study the fine-scale local properties of these thin groups (see this paper), and certain number theoretic sequences derived from thin groups (Farey sequences for thin groups – see this paper). In both of these papers we used techniques from the world of homogeneous dynamics (namely the equidsitribution of expanding horospheres) to understand fine-scale statistics of these objects. 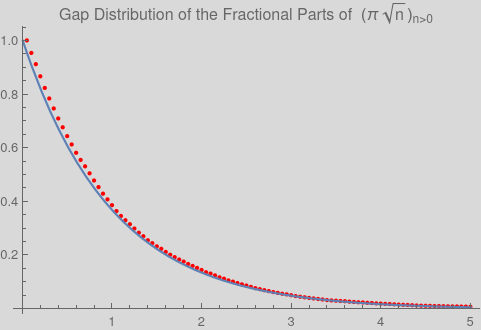 Here is a recording of a seminar I gave on this topic for the New England Dynamics and Number Theory Seminar in November 2021.

In the $20^{th}$ century, starting with the work of Weyl, mathematicians became interested in the statistical properties of monomial sequences of the form $(\alpha n^\theta \mod 1 )_{n>0}$ where $\alpha >0$ and $\theta >0$. From a number theoretic point of view there is a natural question one can ask: in the limit as we consider more and more sequence elements, what can be said about the asymptotic distribution of these points? In other words, can we see random behavior or structure emerging from these sequences?

While this question has a natural motivation from a number theory perspective, there is also a deep connection to quantum chaos. Namely, the Berry-Tabor conjecture (See these notes by J. Marklof) hypothesizes a connection between the the chaotic properties of a given system with the pseudo-random properties of the eigenvalues of corresponding quantom analog. These monomial sequences can appear as the eigenvalues of a quantum system, and thus determining the pseudo-random properties can shed light on this deep hypothesized connection in quantum chaos. The above plot shows the cumulative gap distribution (probability $P(x)$ that the gap between neighboring points divided by the average gap size is larger than $x$) of the sequence $(\pi \sqrt{n} \mod 1 )_{n>0}$ compared to the function $f(x)=e^{-x}$, which is the expected value for uniformly distributed random variables.

One very strong measure of pseudo-randomness, is the so-called ‘pair correlation function’. In this paper, together with A. Sourmelidis and N. Technau, we showed that a wide class of these monomial sequences exhibit Poissonian pair correlation. In fact, this is one of the only examples where the pair correlation function has been shown to converge to the Poissonian limit for explicit values of $\alpha$ and $\theta$. The paper builds on a methodology outlined in this paper which proved convergence of (so-called) ‘long-range correlations’ (a weaker measure of pseudo-randomness) for some other monomial sequences.

In this paper together with N. Technau we extended this previous result to $m$-point correlations for a wide class of sequences, which are even stronger measures of pseudo-randomness. Again, this is one of very few examples showing convergence of the $m$-point correlation to the Poissonian limit, and introduced many new ideas and techniques.

More recently in this paper also with N. Technau we further extended our methodology to sequences of the form $((\log n)^A \mod 1)_{n>0}$. Since these sequences grow slower than the above sequences, we were able to show that all $m$-point correlations converge to the Poissonian limit. This then implies that the gap distribution is also Poissonian. To our knowledge this is the first explicit sequence modulo 1 which can be shown to exhibit this extremely strong pseudo-randomness property.

In the $19^{th}$ Centruy physicists started to ask a simple question, which gave rise to an entire field of mathematical physics – statistical mechanics. The question was the following: given a simple model for the movement of atoms, can we see the laws of physics which goven large scale objects by studying large ensembles of these atoms. For example, can we use particle dynamics to derive the heat equation (the equation governing how heat diffuses outwards, through a fluid)? Since we observe the heat equation in everyday life, any reasonable model of atomistic behavior should have the heat equation as a natural limit. From a probabilistic point of view, one can rephrase this question as follows: given a model for particle dynamics, do the trajectories of the particles converge (in distribution) to Brownian motions (random walks)? This is known as an invariance principle.

One example of a very simple (although highly nontrivial) model for particle dynamics, is the Lorentz gas (introduced in 1908 by physicist Henrik Lorentz). In this model we consider an array of spherical scatterers (think of these like nuclei in a metal) which do not move. Then we consider the motion of a point particle which moves in straight lines, bouncing off of the scatterers (see the left most above image) – if the scatterers model the heavy nuclei in a metal, then the point particle models the motion of a light electron scattering off the nuclei. Again, one of the central questions in the study of the Lorentz gas is: when observed for a long time and scaled appropriately, does the particle trajectory (on average) converge to that of a Brownian motion? In this paper together with B. Tóth, and by introducing techniques from classical probabiltiy theory we were able to show that the Lorentz gas, in a particular intermediate scaling regime, does indeed satisfy this invariance principle. That is, the trajectory of the point particle converges to that of a Brownian motion when scaled correctly and observed over long times. In our case we arranged the scatterers randomly through space (the random Lorentz gas) and worked in 3 dimensions. This was the first result in this direction for the random Lorentz gas since the 1980s, and the first result which took into account the fact that the dynamics are not independent (that is the first result which handled recollisions with the same scatterer).

In this paper we were able to apply the techniques developed in the previous paper to the so-called Ehrenfest wind-tree model (which dates back to 1912 and Paul and Tatiana Ehrenfest’s monograph on statistical mechanics) where the scatterers are replaced by cubes (the middle image in the above). That is, we again proved an invariance principle in a particular scaling limit.